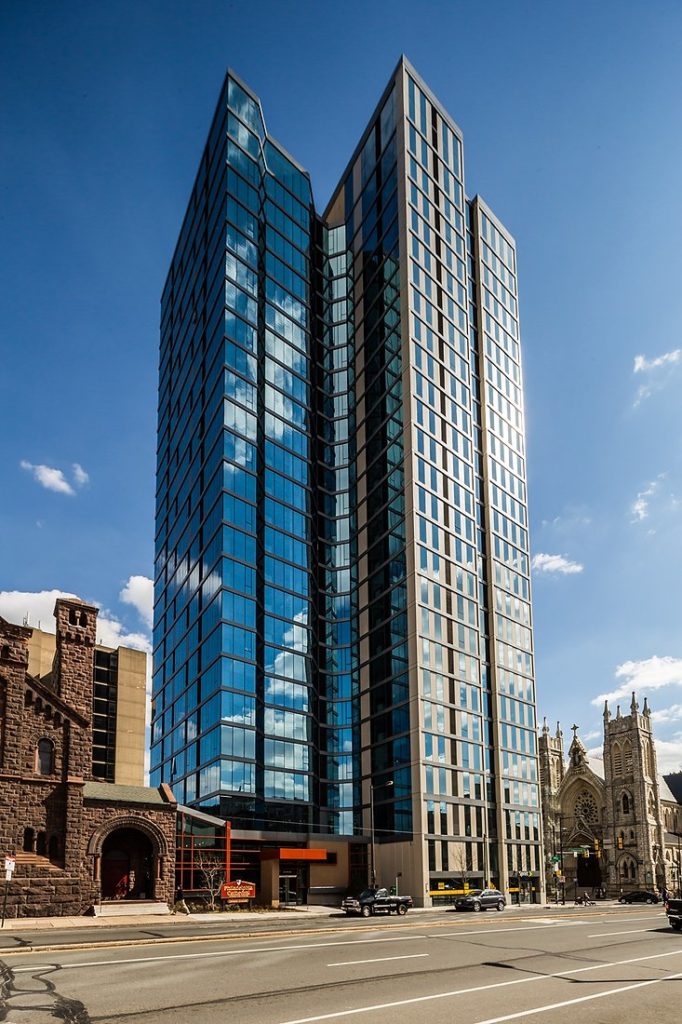 PHILADELPHIA, PA (July 12, 2017) – Leading real estate development company Radnor Property Group LLC has announced today the sale of 3737 Chestnut, a $92.5 million from-the-ground-up development which was completed in fall of 2015. The 26 story, 276-unit apartment building was sold to a joint venture of Korman Residential and The Carlyle Group for $118 million, which totals to approximately $544 per rentable square foot. The upscale residential building, located at 38th and Chestnut Streets, is fully leased at the time of the sale.

3737 Chestnut proves the strength of Radnor Property Group’s primary focus within the city in the growing “Meds and Eds” sector, where growth is projected to continue; attracting graduate students, millennials and young professionals, as well as creating thousands of additional jobs. In University City alone, the population of 22-24-year-old residents is over 53,000, with nearly 44,000 enrolled in colleges located within the region. As of 2016, the district now provides jobs to almost 77,000 residents with no signs of slowing down. Since 2000, University City has grown by 16%, attracting young, working professionals looking fo r the kind of upscale, amenity-rich developments that Radnor Property Group has shown a capacity for.

Their work on 3737 Chestnut garnered Radnor Property Group the coveted Urban Land Institute’s Willard G. “Bill” Rouse III Awards for Excellence for their ability to convert church owned property into a lucrative mixed-use project. Radnor Property Group and equity partners invested $37,400,000 in the project, with total project costs around $92.5 million. Described by award judges as a “well-choreographed public/private partnership with creative multi-source financing on a tight site,” this 276-unit mixed-use project stabilized the asset of the historic Episcopal church and provided a new three-story office building, its community center and childcare center with a rooftop playground, as well as much-needed market-rate housing and top-notch amenities for those who work and study nearby.
The luxury community offers residents an unrivaled living experience in a pivotal location with easy access to walk-able streets, public spaces, and mass transit. Floor plans combine smart layouts and modern style to maximize stunning views with floor-to-ceiling windows. Open living areas are available throughout nine floor plans with one and two bedroom options that include spacious kitchens and bathrooms. The growth of the district is also reflected in rent prices, which have held steady growth at 3737, averaging a gross rent per square foot of $3.00.

Radnor Property Group has proven its ability to develop Philadelphia’s most booming neighborhoods, as well as their unique expertise in public/private partnerships and complex financial structuring. In addition to the monumental sale of 3737 Chestnut, Radnor Property Group is putting final touches on University City’s residential Vue32, a 164-unit apartment building in partnership with Drexel University, and recently broke ground on a 279-unit offering The Hamilton, in partnership with Community College of Philadelphia, which is projected to open in fall of 2018.