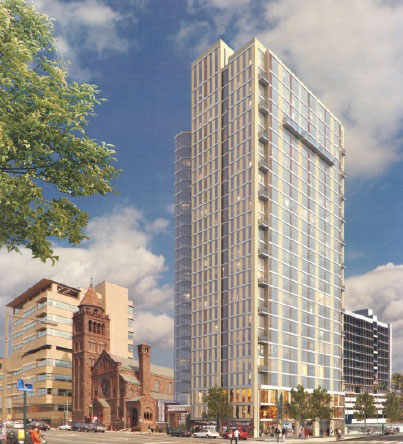 Radnor Property Group in partnership with the Philadelphia Episcopal Cathedral will move forward with the construction of a $105 million project at 38th and Chestnut streets in Philadelphia after settling litigation with the Preservation Alliance.

The lawsuit stopped the developer from moving forward with the project and the Preservation Alliance withdrew an appeal in the matter that clears the way for Radnor Property to go ahead and break ground in early September. Plans call for a the construction of a 25-story residential tower that will have 280 market-rate apartments that will cater to graduate students and professionals. It will also include 30,000 square feet of commercial space in which half would be occupied as new offices for the cathedral and diocese. The other half would be a childcare center that will accommodate 110 children. It will also include a community center. In all, the mixed-use development will encompass roughly 300,000 square feet. It is scheduled to be completed by fall 2015.

“There’s a lot economic development and community development benefits of this project,” said David Yeager, president of Radnor Property. “The site is really terrific. It’s at the door step of Penn’s campus and the demand for market rate apartments is strong.”

A study conducted for the developer concluded that the project will create 157 permanent jobs and $1 million new tax revenues for the city.

The project was long in planning. Two years ago, the Philadelphia Episcopal Cathedral issued a request for proposals for ideas on developing its site in West Philadelphia and eventually selected Radnor Property. Last June, the developer received approval from the Philadelphia Historical Commission to raze two structures on the church’s property to make way for the new apartment tower and ancillary uses. The buildings, a parish house and rectory, were on the National Register of Historic Places and the Preservation Alliance of Philadelphia appealed the Historical Commission’s decision to grant permission to demolish the two structures.

The Preservation Alliance reached an agreement with the Philadelphia Episcopal Cathedral and Radnor Property that “guarantees the long-term care and preservation of the historic cathedral building,” according to a statement issued by Radnor Property. The church was constructed in 1855 by Samuel Sloan and rebuilt and expanded by Philadelphia architect Charles M. Burns after a fire destroyed it in 1902.

In its own statement, the Preservation Alliance said that, under a detailed agreement, the organization will no longer look to overturn the Historic Commission’s approval of the development.

“We are happy that the parties were able to reach this agreement. This project and the decision of the Historical Commission presented difficult issues for the preservation community in general and the Alliance specifically,” stated Marian A. Kornilowicz, chairman of the Preservation Alliance board. “Although the Alliance recognizes the good intentions of the Historical Commission in reaching its decision, it has serious reservations about the commission’s interpretation of the law and the procedures followed in this case. Nonetheless, the Alliance concluded that an appropriate settlement would be in the best interest of all parties and we were able to accomplish that.”

However, Radnor Property can proceed with tearing down the two buildings that Yeager said are in subpar condition.

“The brownstones are really in bad shape,” he said.

Yeager is confident the market can absorb another batch of new apartments, citing a vacancy rate that remains below 5 percent. He is also not worried about lining up financing. Radnor Property is partnering with the Philadelphia Episcopal Cathedral on the project. It has entered into a long-term lease on the property. BLT Architects has designed the tower and Intech Construction will serve as construction manager.