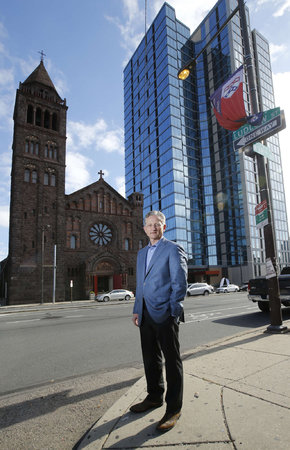 It was not, David Yeager readily acknowledged, your typical urban high-rise-apartment construction project.

But Yeager, founder of Radnor Property Group in Wayne, had never partnered on a project with a church – in this case, the Philadelphia Episcopal Cathedral.

That partnership has produced a 26-story, 276-unit glass-and-steel structure at 37th and Chestnut Streets and a three-story office building, as well as a 19th-century Romanesque-style brownstone church now in much better shape than it has been in decades.

The apartment building accounted for $95 million of the total $115 million project cost and was designed by BLT Architects. It is the first built in University City since Domus – originally intended as condos until the bottom fell out of the real estate market – in nearly a decade, Yeager said.

Even without a rentals boom that has been filling in for a for-sale housing market that is not fully recovered, multifamily construction in University City is a no-brainer – even a project conceived more than five years ago.

“There are 50,000 students in University City,” Yeager said. “It is an eds-and-meds center, with 72,000 jobs, and research and development of $5 billion in the last five years.”

Since the first resident moved into 3737 Chestnut’s completed first phase on Aug. 1, graduate students and professionals have accounted for 40 percent of units leased in the building, which is managed by Bozzuto Group of Greenbelt, Md.

“That is ahead of projections,” Yeager said.

The ingredients of 3737 Chestnut are familiar to builders of multifamily housing today – especially the 12,000 square feet of amenities space on the second floor.

It includes conference rooms where University of Pennsylvania students already living there can study. There are fitness machines, a yoga room, and a gourmet kitchen.

Topping it off, literally, is an area on the roof – with an unimpeded view in all directions – that has sofas, chairs, tables, and grills for barbecuing.

“Units are getting smaller because today’s renters prefer to socialize” in common areas, he said, so amenities spaces are getting larger and more complex. Apartments “are just a place to sleep.”

Yeager said 3737 has what he considers the perfect mix of unit sizes – 75 percent are one-bedroom, the rest are two-bedroom – to meet the demands of University City’s demographic.

That demographic includes physicians at Penn Medicine, some of whom live as far away as Connecticut and commute here for work a few days a week, Yeager said. It also includes young professionals looking for more space than they find available in Center City and less of the hustle and bustle.

“The one bedroom is the most popular because of its floor-to-ceiling windows and concrete ceilings, which make it appear even more spacious,” Yeager said.

Rents start at $1,775 for a junior one-bedroom – tenants pay utilities – to $3,500 a month for a 26th-floor two-bedroom that he said was unfinished, and already rented, at the end of October.

Yeager’s group has another multifamily project in University City at 3201 Race St., near the railroad yard, on a lot owned by Drexel University. He expects to begin building in February or March.

That planned 164-unit, 16-story building, with a child-care facility accommodating 180 children, should take 18 months to complete.

Radnor Property Group has focused on public-private partnerships for the last decade, so when the Episcopal Diocese of Pennsylvania retained it to turn its real estate into an income generator for the cathedral, it was not a totally new world, Yeager said.

“We were able to come up with a solution to generate capital for the cathedral, develop a child-care facility in the undercroft as well as a community center, and build a three-story office building on the other side of the tower on an infill area,” he said.

The third floor of that building houses diocesan offices, relocated from Society Hill, he added.