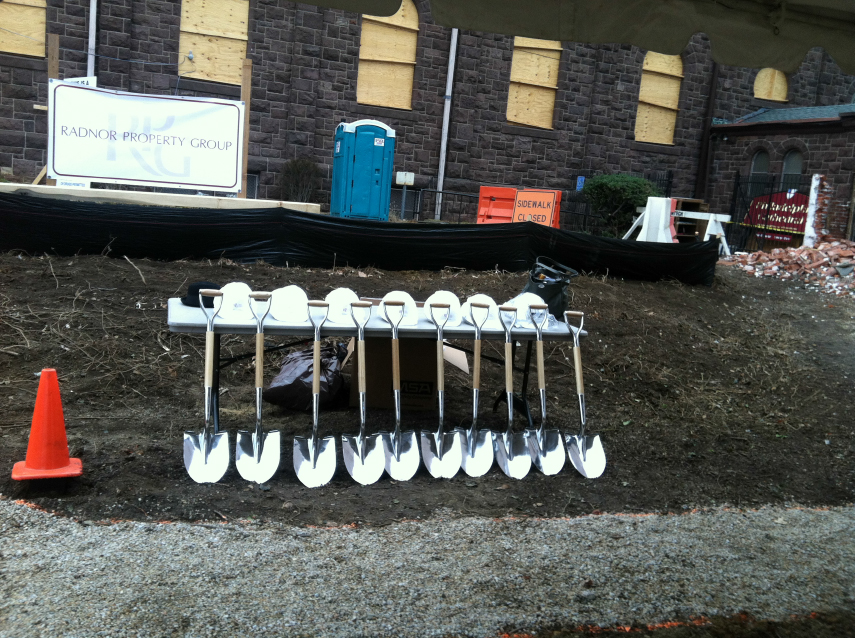 Radnor Property Group and the Philadelphia Episcopal Cathedral jointly announce the groundbreaking for an innovative, $110 million development in University City. The event takes place in the Cathedral with groundbreaking on the northeast corner of 38th and Chestnut Streets, Thursday, December 5, at 2 p.m.

This project is an exceptional partnership between a private development company and a nonprofit. This 326,000-square-foot development has three major components: (1) a new 25-story residential tower; (2) the new Episcopal Cathedral Center including the construction of a three-story office building, a community center, and an early-learning childcare center serving the needs of the neighborhood; and (3) improvements to the historic Cathedral building.

A prime example of urban mixed use, the project features construction of a 287,000 square-foot, 276-unit, Class “A” apartment building with ground-floor retail. In addition, a new three-story office building, also with ground-floor retail, will be built just west of International House and will create 15,000 square feet of additional rental space.

The new buildings will have underground parking to supplement street and public parking. University City is a walkable neighborhood with extensive mass transit. Space is available for tables and chairs on the newly created plaza in front of the office building and on the sidewalks to help activate the streetscape.

Known as “38Chestnut,” the apartment building will cater to graduate students and professionals, with studios, one- and two-bedroom apartments, all with modern features and expansive natural light. Amenities include a state-of-the-art fitness center, a variety of activity spaces with a full kitchen and a bar, an audio-video entertainment room; and a “green” roof with a “Zen Garden” offering a landscaped, outdoor lounge. Occupancy is scheduled for summer 2015.

The project is owned by “3737 Chestnut, LP.” Radnor Property Group of Wayne, Pa., is a general partner and the developer. Assurant, Inc. with world headquarters in New York is co-general partner providing investment capital for the development. Assurant is a NYSE-traded, international financial-and-insurance benefits company.

“This site was immensely desirable to us because it’s one block from the University of Pennsylvania’s campus and hospital complex and just a few blocks from Drexel. It’s very exciting to be part of University City’s ‘Eds and Meds Corridor,’ which is growing rapidly into the second downtown of Philadelphia,” said David Yeager, president of Radnor Property Group.

“The way is clear now for us to expand our already substantial social ministries to strengthen the well-being of the local community. We will also be able to use funds from the development project to assure the long-term health of our extraordinary Cathedral building,” said the Cathedral’s dean, The Very Rev. Judith A. Sullivan.

The undercroft of the church will house a new early learning childcare center, open to the public and operated by Hildebrandt Learning Centers, the largest childcare operator for non-profits in Pennsylvania. The childcare facility can accommodate 110 children and will provide scholarships for eligible families. The students will enjoy the playground planned for the roof of the office building.

Formerly known as the Protestant Episcopal Church of the Saviour, the Cathedral was designed in 1855 by Samuel Sloan, a prominent Philadelphia-based architect. After a 1902 fire, it was rebuilt and enlarged according to the plans of another well-known Philadelphia architect, Charles M. Burns.

Based on an economic and fiscal impact study completed by Econsult, the project will create, during the construction phase, 432 family-sustaining jobs generating $1 million in new tax revenues for the City. Ongoing operations will generate 157 permanent jobs resulting in City tax revenues of $460,000 in the first year of operations and will increase annually thereafter.

The Cathedral Center project is owned by the Episcopal Cathedral and benefits from the New Markets Tax Credit Program. Established by Congress, the program attracts investment capital to low-income census tracts for economic and community development purposes. It fosters the development of urban mixed-use projects and community facilities. Funding for the Cathedral Center project is provided by The Reinvestment Fund, PNC Bank, Commonwealth Cornerstone Group and Boston Community Capital.

Radnor Property Group LLC of Wayne, Pa., is a real estate development company that specializes in forming public-private partnerships with nonprofit institutions. It provides these partners with entrepreneurial expertise to maximize profits while adhering to the ethos of the organization. RPG was founded by David Yeager in 1999. Since then it has worked on more than 3.8 million square feet of development projects and $330 million of improvements, including more than 25 nonprofit institutions in higher education and religious organizations.

The Philadelphia Episcopal Cathedral is the seat of the Bishop of the Episcopal Diocese of Pennsylvania and the spiritual home of the more than 140 Episcopal churches in Philadelphia and the surrounding counties. The Cathedral serves the religious and community needs of its University City neighborhood, and beyond, through its ongoing ministries as it advances the Gospel of Jesus Christ.